Quest for the Baby Quilt 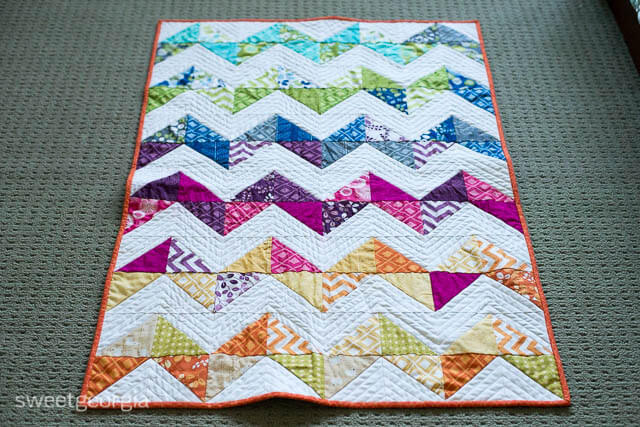 Back in June, when I was about 4 months pregnant, I became obsessed with the idea of making a baby quilt. We hadn’t announced our pregnancy yet, but the fact that I was furiously pinning baby quilts on Pinterest gave it away to some people. The mere mention of my wanting to quilt something made Liisa speculate out loud, “You must be pregnant. You’re nesting.” Nevertheless, I continued along in my newfound quilting adventure.

Well. It’s not exactly newfound. I’d been heavy into sewing when I was younger — sewing many of my own clothes in high school along with my black velvet grad dress, and later, all my ballroom dance costumes. In university, I spent my summers sewing dresses for a costume shop that catered to exotic dancers in addition to their regular Halloween costume clientele. Sewing was such a big part of my life that I wanted it to be a part of our wedding too… and so I designed this little patchwork ring pillow: 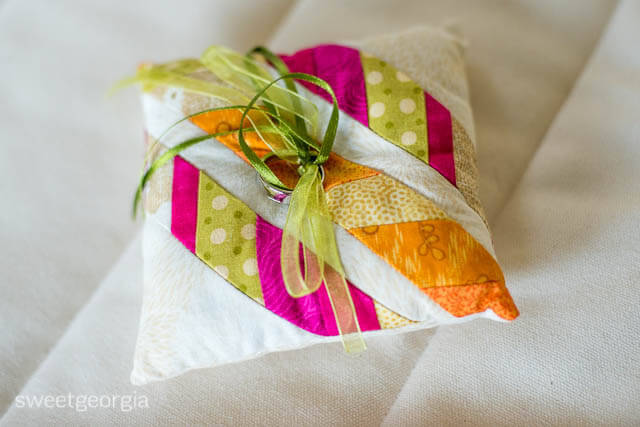 Patchwork ring pillow for our wedding

I bought several fat quarters in our wedding colours and some coordinating colours and made this sort of diagonal “stacked coins” design. Seeing as how I used only tiny bits of fabric for this little 6″ square pillow, I had tons of fabric leftover. It felt like a beautiful thing, to be take the fabrics that we used in our wedding and incorporate them into a blanket for the baby.

To augment the pinks, oranges, greens, and cream colours that I had, I added Vanessa Christenson‘s Simply Color to the mix. We didn’t ask to find out the gender of the baby, so I never made anything that was stereotypically “girl colours” or “boy colours”… I just wanted it to be fun colours. Sophisticated brights, if there is such a thing.

Over the months, I worked on the quilt on and off. I sewed the half-square triangles and then spent hours trimming them down while binge watching the West Wing on netflix. Seeing this quilt come together was so satisfying. And in the final trimester of my pregnancy, my hands swelled up so badly that I got carpal tunnel syndrome and couldn’t knit more than ten stitches without being in pain. Sewing again became my solace during this time. I could keep playing with colour and crafting, without killing my hands.

I machine quilted the chevron design while waiting for my contractions to get closer together and even started piecing together the binding. After the baby arrived, everything came to a standstill and all things revolved around the baby’s erratic eating and sleeping needs. Nearly two months later, I managed to finish sewing on the binding… each night a few inches at a time, while carrying the baby in the Ergo and trying to get him to sleep. 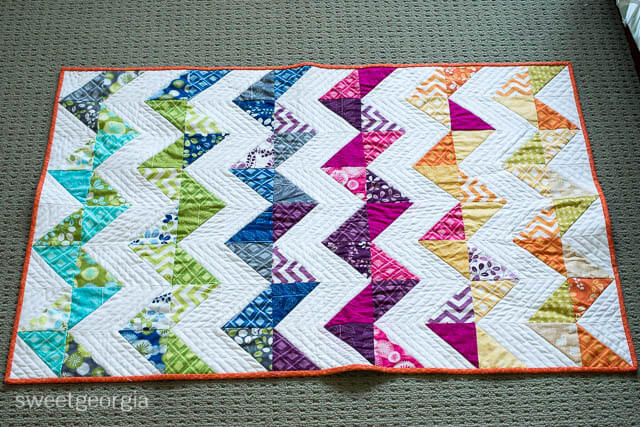 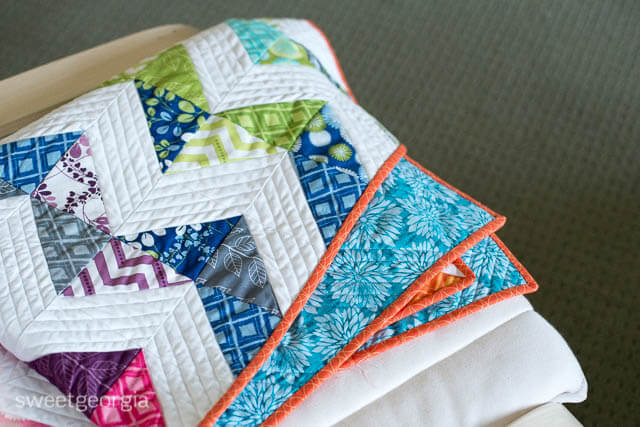 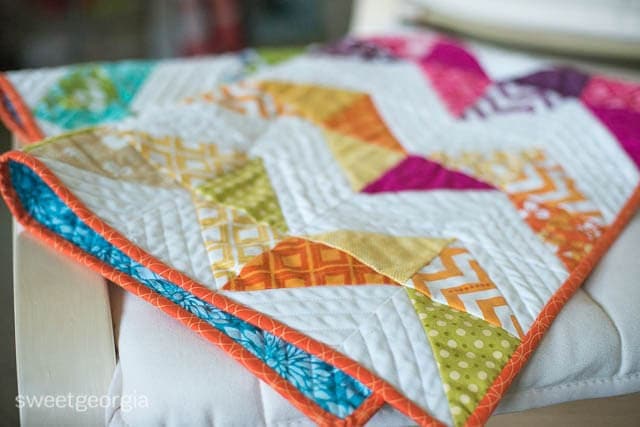 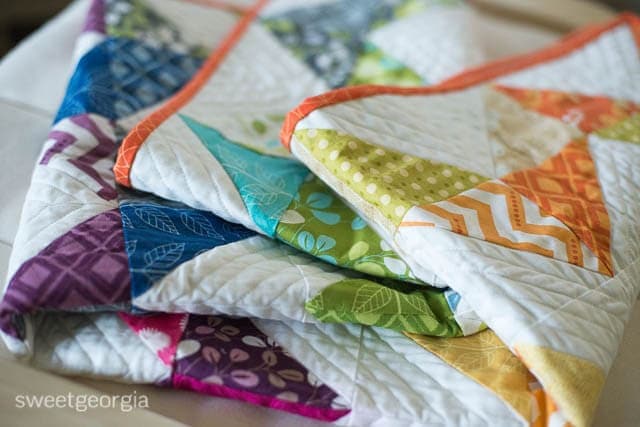 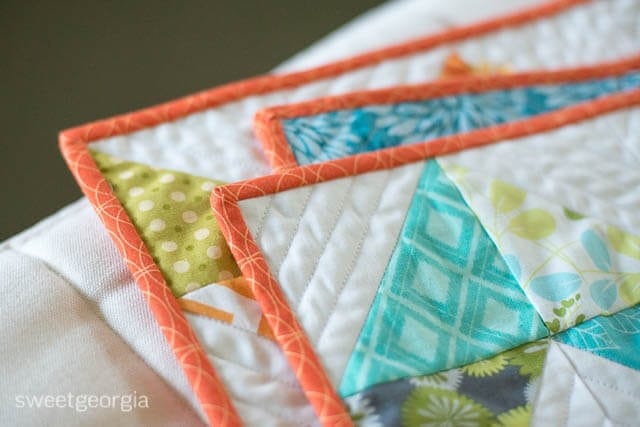 Every time I see this quilt, it makes me happy. The clear, crisp colours. The paintbox-hued ombré effect. This quest for the Baby Quilt is complete. Achievement unlocked. But the adventure is not yet over. 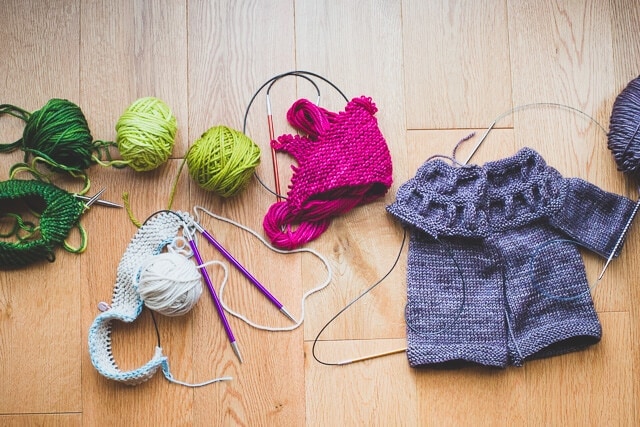 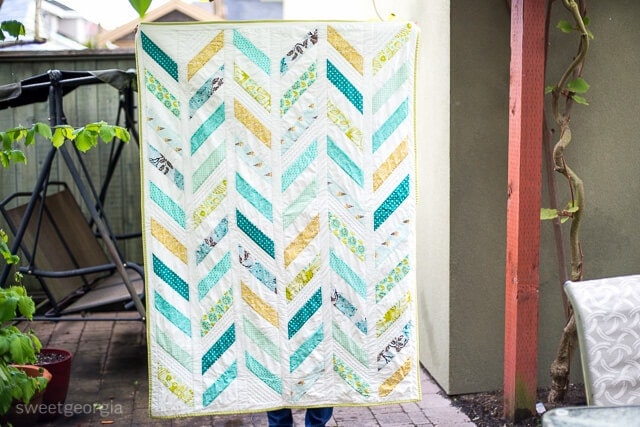 It is finished! It is gifted! The baby has arr...
END_OF_DOCUMENT_TOKEN_TO_BE_REPLACED

It might sound silly, but my mood seems direct...
END_OF_DOCUMENT_TOKEN_TO_BE_REPLACED

12 thoughts on “Quest for the Baby Quilt”