One of the things that’s been really great about bringing our beautiful SweetGeorgia Yarns to the UK is becoming part of the knitting and fibre community there. We’ve gone to yarn shows and festivals as exhibitors and also as visitors to meet with our stockists and learn more about knitters in the UK. And we’ve also been meeting and working with UK designers to help us spread the word about SweetGeorgia.

The latest designer we’ve worked with is Louise Zass-Bangham, also known as Inspiration Knits. Louise has a love of colour and texture bordering on obsession that she translates into her quick-to-knit designs. This week Louise released two new patterns that are perfect for our SweetGeorgia Superwash DK, Superwash Worsted or Trinity Worsted – the Pen & Ink cowl and the Inked In hat. As she also lives in London, I had the opportunity to sit down with her and ask her about her design process. 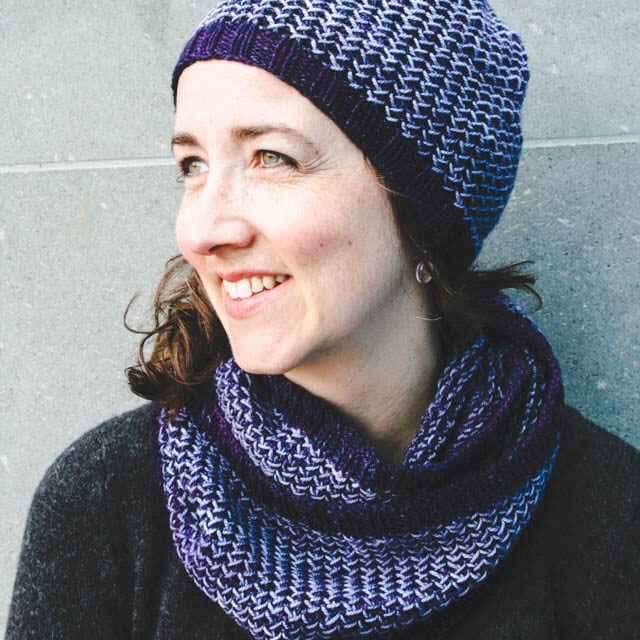 The new Inklings set: Pen & Ink cowl and Inked In hat. Shown in SweetGeorgia Superwash DK in Ultraviolet and Wisteria.

Tell us a bit about yourself!
I live with my family in West London. My studio is crammed with yarn, buttons, beads, sketchbooks, a library of design books covering everything from wrought iron to postcards, and all manner of arty-crafty paraphernalia. My desk is covered in patterns, yarn, swatches and special things the kids have made for me, plus random family detritus which I have to work hard to evict from every surface.

I fit in designing around the kids being newly at school, so I don’t have a fixed routine yet, aside from the ebb and flow of school holidays. I aim not to work during school holidays, so it’s a holiday for all of us, though I have to find a few days work time in the long Summer break.

I like to bake, which the kids enjoy if it involves chocolate. And yes, I like to slouch on the couch with my knitting at the end of the day!

How did you learn to knit?
I was taught at school when I was 8, by a fierce Home Economics teacher. I remember spending an entire lesson trying to do a slip knot! The first thing I knit was a garter stitch teddy bear. The next thing was a yellow and white striped ball in stocking stitch. It must have had short rows, or some other sort of shaping, because it was a sphere knit all in one piece. My teacher didn’t hang about with the keen kids, and I was definitely keen!

Are you multi-craftual? Do you practice any other fibre arts?
Does baking count as a craft? I do quite a lot of that! I’ve dabbled in other fibre arts, but knitting usually takes over. Having said that, I seem to be on the slippery slope towards being a spinner. I have a spindle and I started a fibre stash this week! I’ve been resisting because my yarn stash is already rather weighty. 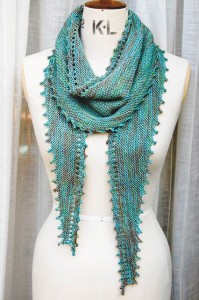 One of Louise’s most popular patterns is Knit Night.

How did you start designing?
I can’t think of a time when I wasn’t designing things. If we’re talking about how I got into designing hand knits, I’ve got a degree in textile design and I specialised in knit. When I had kids, I know it’s a cliché but I got back into hand knitting. Then it became a running joke in my knitting group that I never knit the actual pattern because I’d modified it beyond recognition. Around that time the creative itch was getting to me. So I started designing hand-knits.

Tell us about Inklings. Where did the inspiration come from? (AT note: Inklings is the name of the e-book containing both patterns).
I love vintage knitting patterns. I don’t usually knit a whole project, like some vintage knitters. Instead, I like to look at the elements of the patterns and just use them for inspiration. I tend to pick up on details or interesting stitches. I found this stitch when researching ideas for another design, and then I kept tinkering with it…until it became a DK, striped, textured fabric that wanted to be a cowl and a hat: Inklings.

You design a lot of accessories: shawls, scarves, cowls, hats, mittens. How do you come up with your ideas and keep things fresh?
My ideas come from lots of different places. I do love researching stitch patterns, whether in old stitch dictionaries or vintage pattern magazines. I have a prized collection of nearly all of the original British Vogue Knitting Books from 1931 to 1969.

Beautiful yarns challenge me to find a way to show them off in their best light. I love gorgeous yarn and I love to swatch! I do get rather colour obsessed sometimes. I keep a big jar of favourite yarns on my desk, like sweets. Sometimes ideas bounce around for months (years) before they fall out as a fully formed pattern.

I like to keep half an eye on what’s happening in the fashion industry, even though I don’t work in it any more. Seeing other people’s interpretation of a concept can spark your own ideas. It’s just another thing to stir into the pot.

Sometimes ideas come from surprising places – the concept for geometric Safe Haven just popped into my head in the shower…which has square tiles! Then I had to work out the technical challenges. Creative ideas don’t come from inside someone’s head; they come from outside. Everyone needs a spark, and it can come from anywhere.

I do love sketching down random ideas, or grabbing a quick photograph, so I remember later. Yes, I do have a sketchbook by my bed. My husband will nag me with “Have you written it down?” if I announce I have an idea, because he knows I’ll be grumpy later if I can’t remember it! 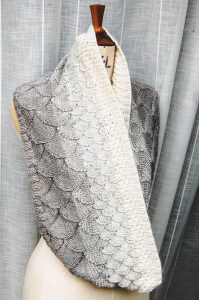 Louise loves playing with colour and pattern, and blends the two beautifully in this version of Song of the Sea.

What is your favourite thing about the design process?
All of it! I love going out on a “proper” research trip, which can be the obvious such as the V&A or the less obvious like a steam museum. I love playing and playing and playing with an idea, which if you’re posh you’d call design development. Then it’s great to see the finished item, off the needles. I guess I have a least favourite part, which is polishing the pattern, because I want it to be right and it takes longer than I’d like. At this stage I’m excited and just want to share the pattern. But that’s why I have a tech editor! And then it’s fantastic to see other people knit the pattern themselves, through testing and when it’s out there on Ravelry. Then I know it’s really worked. I love looking at people’s project pages, and love all the feedback, which goes back into the design melting-pot.

What sorts of things do you knit when you’re not designing?
I still knit things for my kids. Even though they’re less keen to wear what I make, they’re still hugely excited that mummy made something for them, so it’s strangely worth it! Occasionally I do charity knits, like the recent appeal for knits from the Great London Yarn Crawl for their chosen charity, Refuge. I rarely knit sweaters, though it does happen. I tend to get to the armholes and stall. I have three sweaters in that state. I haven’t quite worked out why this is happening!

I will tackle big lace shawls, but restrict it to one WIP on the go at any one time. The current Aeolian has been in time-out for a year and it’s holding up my shawl queue something chronic! Obviously I modified that too… it’s irresistible.

What is the best piece of knitting advice you’ve ever been given? And what’s your number one knitting tip for others?
An expert lace knitter once said, while we were admiring her flawless shawl; “As you get more experienced you don’t make fewer mistakes; you just get better at fixing them.” She’s so right.

My number one tip is that there’s never anything “wrong” in knitting. There’s just the way you want it to look, or the way you want to do it. If you’re consistent throughout a project it’ll be fine. I’ve written a blog post about it! 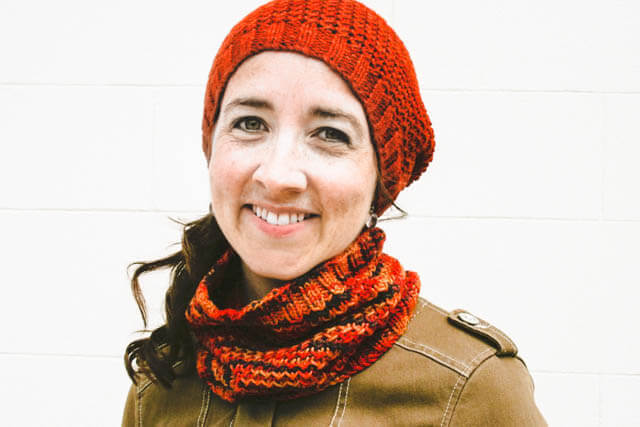 The Inklings combo again, this time in Trinity Worsted. Cayenne for the hat, and Phoenix Rising for a snug version of the cowl. Both only one skein projects!

We’ll stay tuned Louise and keep our eyes out!

And if you’re in the UK and planning on attending Yarndale this coming weekend, we’re thrilled to announce that our stockist Purlescence will be debuting our Trinity Worsted yarn at the show on stand 148. They’ll have samples of both the Pen & Ink cowl and the Inked In hat for you to try on, and will kit specials with either the Trinity Worsted or Superwash DK, along with the patterns. Louise will also be on the stand on Saturday, 27 September from 2-3pm to answer any questions you might have about the pattern, or help you choose your yarn! 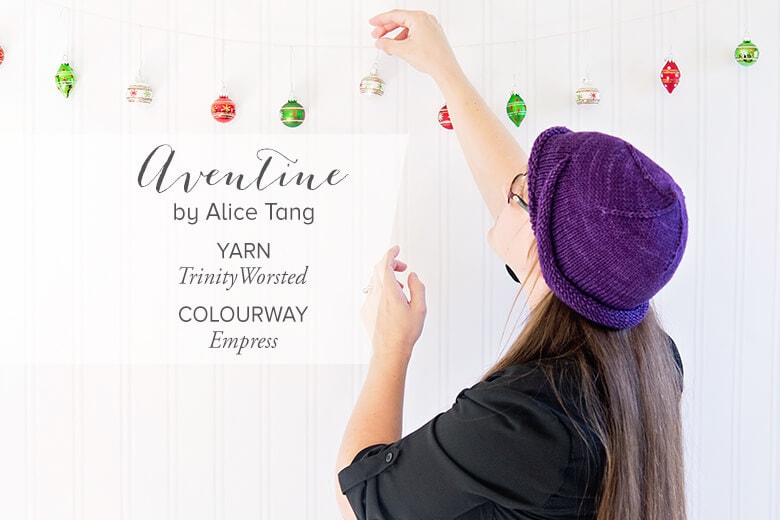 I am an engineer by training and I love interestin...
END_OF_DOCUMENT_TOKEN_TO_BE_REPLACED 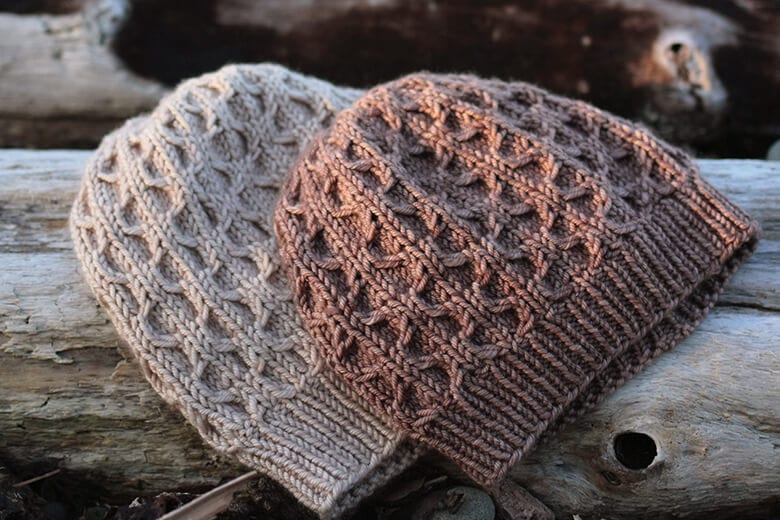 Light and Shadow by Tin Can Knits

When a designer used our yarn to create something ...
END_OF_DOCUMENT_TOKEN_TO_BE_REPLACED 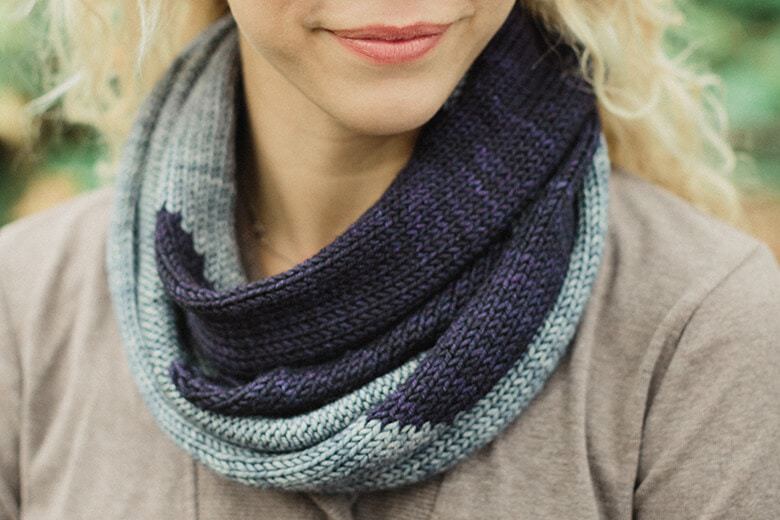 The scarf design was inspired by the image of a ...
END_OF_DOCUMENT_TOKEN_TO_BE_REPLACED 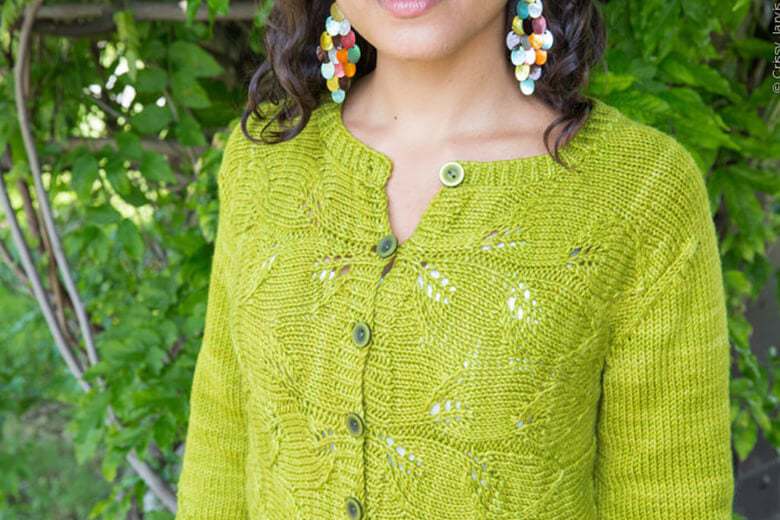 Her sweater, Philodendron, is beautifully unique i...
END_OF_DOCUMENT_TOKEN_TO_BE_REPLACED 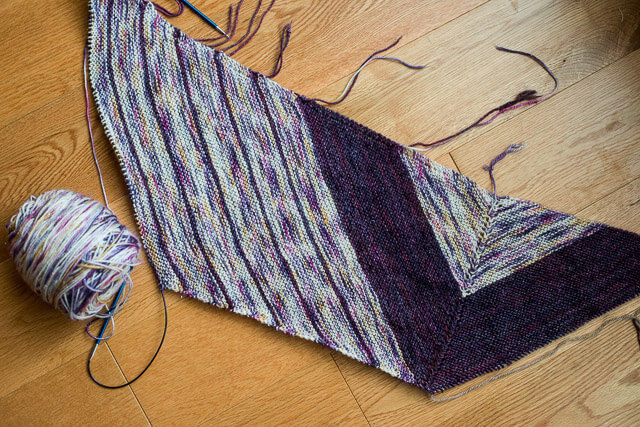 There is always some kind of knitting going on in ...
END_OF_DOCUMENT_TOKEN_TO_BE_REPLACED

Welcome to the 6th stop of the "Palette" Blog To...
END_OF_DOCUMENT_TOKEN_TO_BE_REPLACED

Here's one of our first fall patterns. Chris Har...
END_OF_DOCUMENT_TOKEN_TO_BE_REPLACED

I heart Shannon Cook at Luvinthemommyhood... she...
END_OF_DOCUMENT_TOKEN_TO_BE_REPLACED

Ever since we displayed this gorgeous shawl at T...
END_OF_DOCUMENT_TOKEN_TO_BE_REPLACED