One of my goals of the new year was to learn how to spin. Whenever I would go to Felicia’s house to help her film for School of SweetGeorgia, I would always see her spinning wheel sitting in her office with some partially completed project patiently waiting for her return. My curiosity was peaked further when I would be editing posts for the SweetGeorgia blog and see Katrina and Rachel’s posts about what they had spun up using the past SweetGeorgia Yarn’s fibre club. It really was fascinating the various yarns they could create: thin elegant yarns for delicate shawls, chunky playful colourful ones to create dramatic statement pieces… it seemed a world of possibility existed in this art form.

So, I signed up for Katrina Stewart’s four-week class of Beginner Spinning. Although I was slightly nervous, I was more excited than anything, kind of like the feeling of butterflies one experiences before starting a new school semester. I even checked various books out of the library for “research” beforehand, but they lay neglected on the shelf because knitting seemed to be a better way to spend my free time.

My first class was a bit overwhelming. So many the terms the instructor was using sounded so odd to me and had no meaning: Lazy Kate (why was she lazy?), Niddy Noddy, staple length… what?! And don’t even get me started on the names of all the components of a spinning wheel, all I knew is that I chose the Schacht Sidekick as my wheel to borrow for the four weeks because it had a blue wheel (my favourite colour). I decided not to fret about the technical terms and focus on actually spinning the yarn. Katrina made it look so easy. With a serene and meditative look upon her features, her feet pedalled away and her hands gracefully moved forward and backwards, delicately allowing the fibre to be pulled onto the bobbin.

My first time on the wheel was anything but serene or meditative. I have never been a physically coordinated individual, so getting my feet to pedal at a consistent rate while making sure the flyer was spinning in the correct direction and that the fibre was not getting torn, under-twisted, or over-twisted was near impossible. I kept repeating Katrina’s mantra: “Get the fibre on the bobbin, that’s your only goal.” I kept attempting and failing miserably until Katrina taught me how to Park and Draft (essentially loading the fibre with twist and doing the drafting while the wheel is not spinning). It was slow and cumbersome, but some of the fibre was getting on the bobbin! Katrina gave us our homework: have two bobbins ready for next week so we could learn how to ply our singles together and to spin 15 minutes a day. Considering I had barely gotten any fibre onto the bobbin during my first two-hour lesson, I was doubtful I could finish the homework I had been assigned.

Over the next week, I spun for 15 minutes a day, constantly reminding myself to just get the fibre on the bobbin; it didn’t matter how ugly or inconsistent it was, as long as it physically got onto that bobbin. I also made use of the books I had gotten from the library and realized that, because I hadn’t done the pre-drafting properly, no wonder it was so hard for me to draft while the wheel was going! I even had three glorious seconds of victory where I was able to draft the yarn and spin the wheel at the same time! Imagine the happy confidence of a child learning how to ride a bike without training wheels; they are able to keep their balance for a few precious seconds before crashing headlong into a bush.

Within the next few weeks, my skills improved vastly. I was able to now draft the fibre and pedal the wheel at the same time. I learned how to ply my singles together using various techniques and how colours could be created depending on how you separated and spun the fibre. I delved into the different kinds of fibres and how different staple lengths would give you a different yarn. The thing about spinning that fascinated me the most was the amount of control you could have over the yarn you created. You could blend any colours you’d like together depending on how you drafted the fibre, even how you treated the created yarn after washing it could affect the final look of it. The possibilities seemed endless and I felt I was getting closer to the core of one of my main passions in life: yarn. I could plan an entire project from start to finish and even spin custom yarn for that project that met the specific purpose of the garment.

This entire process of learning how to spin reminded me of how it was when I first learned to knit. My first knitting project was an ugly red scarf with scratchy Red Heart Super Saver yarn and cheap metal needles. The scarf had holes in it, added stitches, and the reds were two different dye lots so the red shades were slightly off. It was a hideous scarf that no one in their right mind would wear. But I loved that scarf (I still have it today jammed away in a Rubbermaid bin). And the reason I loved that scarf is because it was mine. It was something I had created with my own two hands and I had worked hard to bring it into the world. Even though I had no idea what I was doing and it was difficult, I enjoyed the hours working on it and it was meditative and calming for me. As I practiced more and more, the things I was creating got better and better. This was the same as the first yarn I ever created: an ugly, scraggly, red skein that looked like Elmo after a bender. However, like the ugly red scarf that came before it, I was immensely proud of that yarn. It was hideous, but it was my creation. 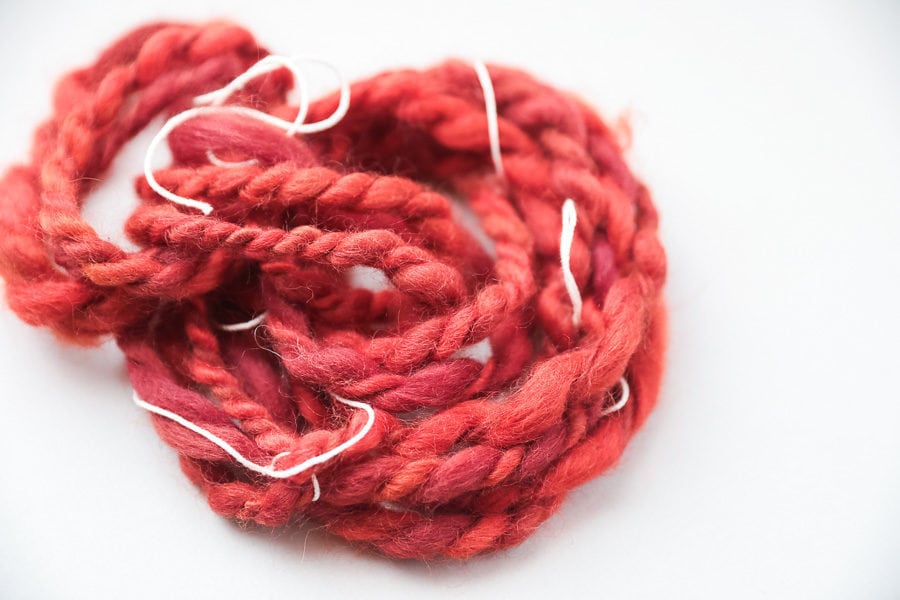 First ever yarn spun in BFL in Cayenne 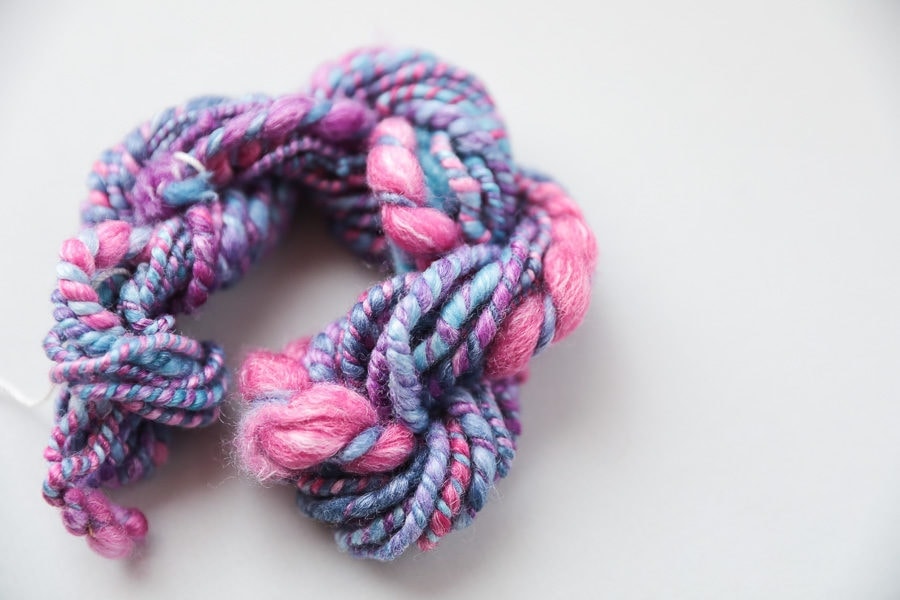 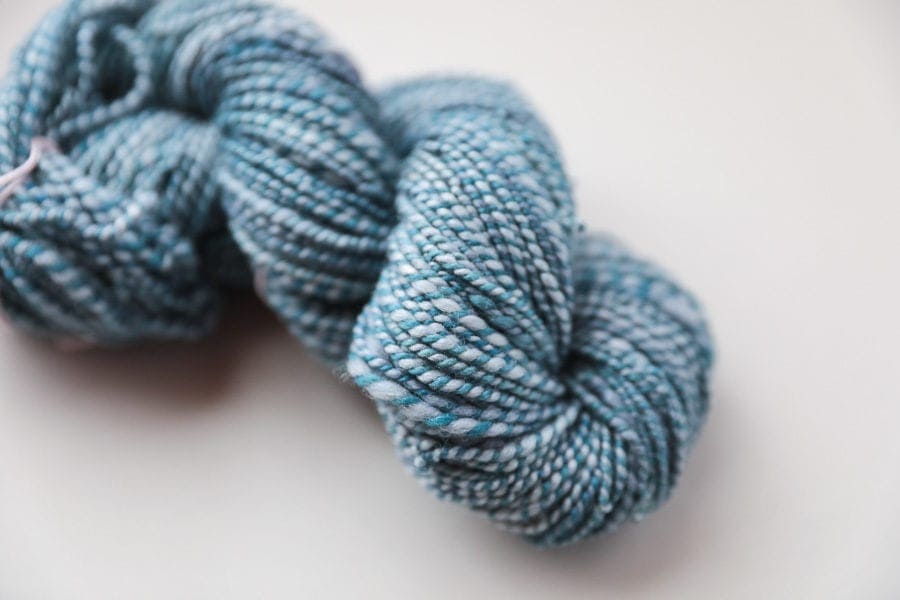 I have tried many new artistic pursuits since 2017, but spinning was the first time I felt that excitement of endless possibility that I felt when I made my very first knit stitch on the couch all those years ago when learning how to knit. I really enjoy the mesmerizing spin of the wheel, the rhythmic pedalling, and the feel of the fibre between my fingers as I draft. It puts me in a state of happiness and calm and I enjoy plopping down in front of my TV and spinning for an hour or so while I listen to an audiobook. Most important of all, spinning my own yarn gives me the endless wonder of creating something from nothing. Taking a ball of fluff and turning it into soft, colourful, yarns gives one a real feeling of accomplishment and pride. I felt very sad when I had to return my little Sidekick back to the studio after my classes were over. I had spent many hours with that little spinning wheel and I felt as if I was saying goodbye to a new friend.

I’d say if you are thinking of starting spinning or any new fibre art: just go for it! Don’t put a lot of pressure on yourself and have fun. Your first few projects probably won’t look anything like you want them to, but just be patient with yourself and enjoy learning a new skill. Who knows, you might find a new passion in the process! 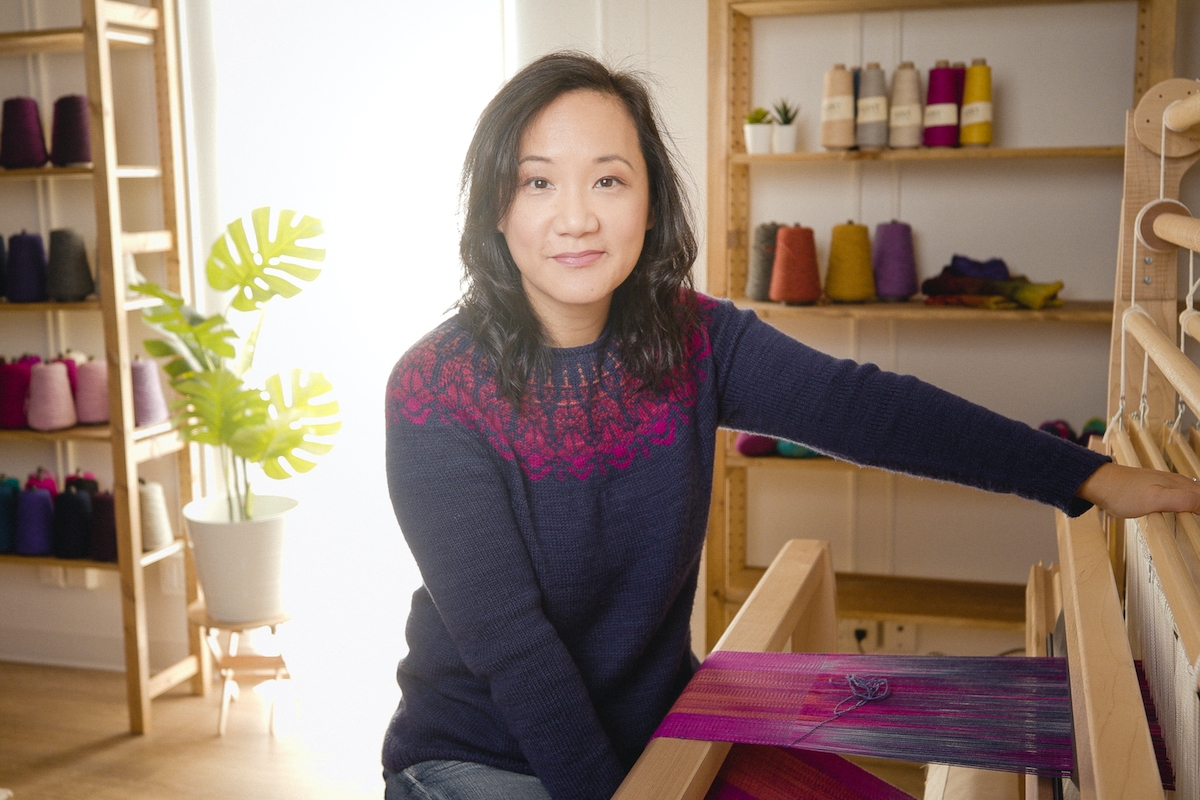 The First Taking Back Friday Livestream

END_OF_DOCUMENT_TOKEN_TO_BE_REPLACED 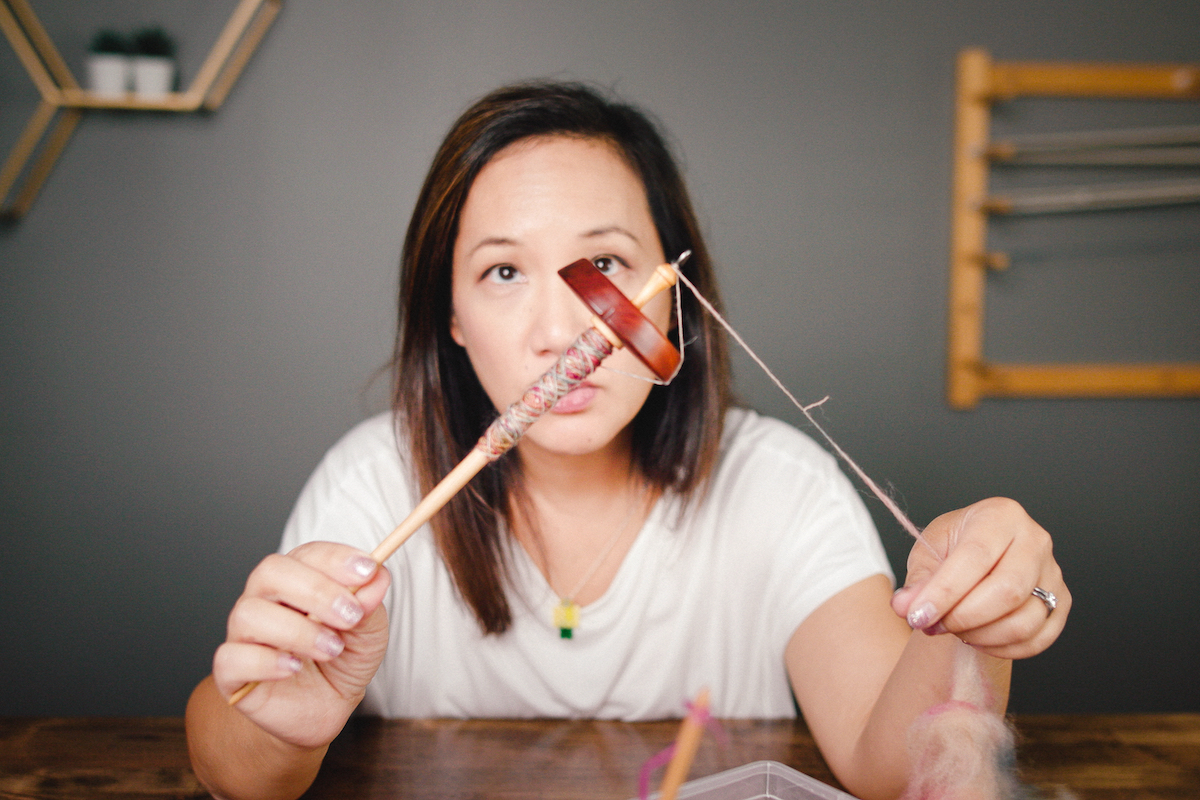 How to Get Started with Spinning Yarn

interested in learning to spin, but don’t know where to start?

END_OF_DOCUMENT_TOKEN_TO_BE_REPLACED 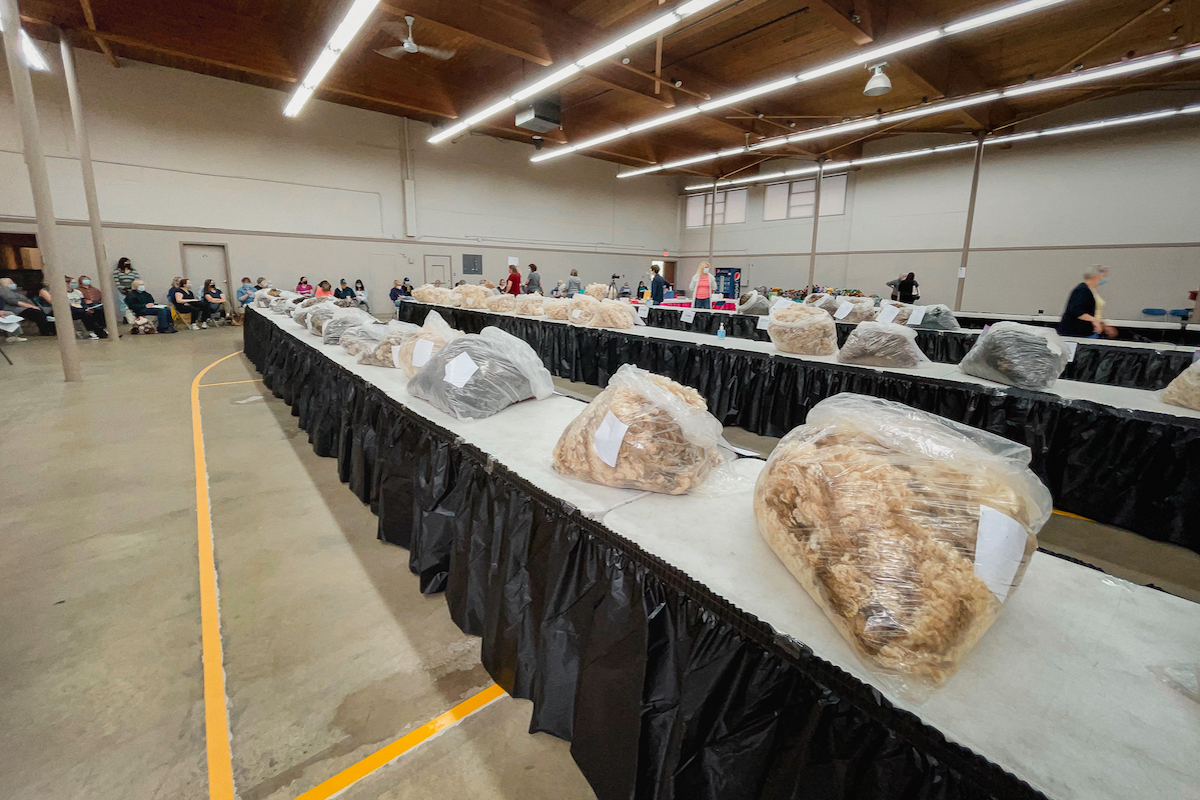 First Time at a Fleece Auction

join in seeing what a fleece auction is all about

END_OF_DOCUMENT_TOKEN_TO_BE_REPLACED 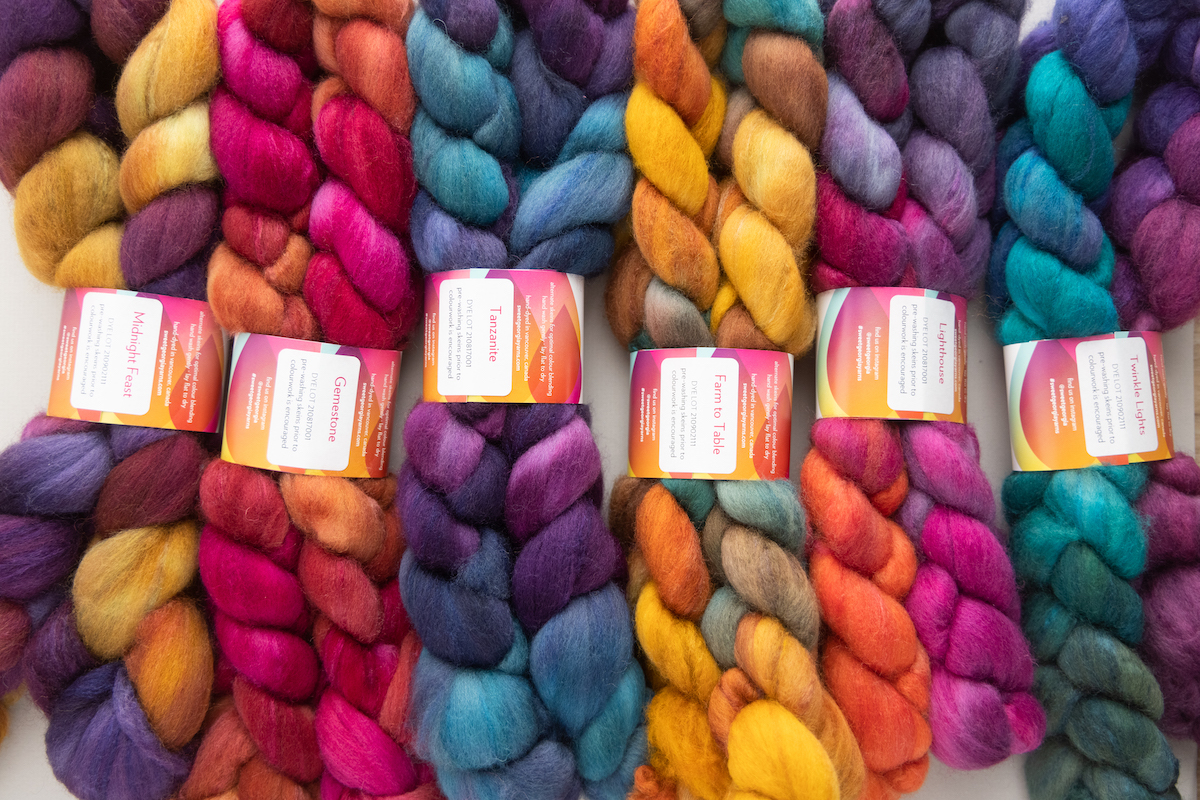 Back to School Spinning

starting new adventures in the month of September

END_OF_DOCUMENT_TOKEN_TO_BE_REPLACED 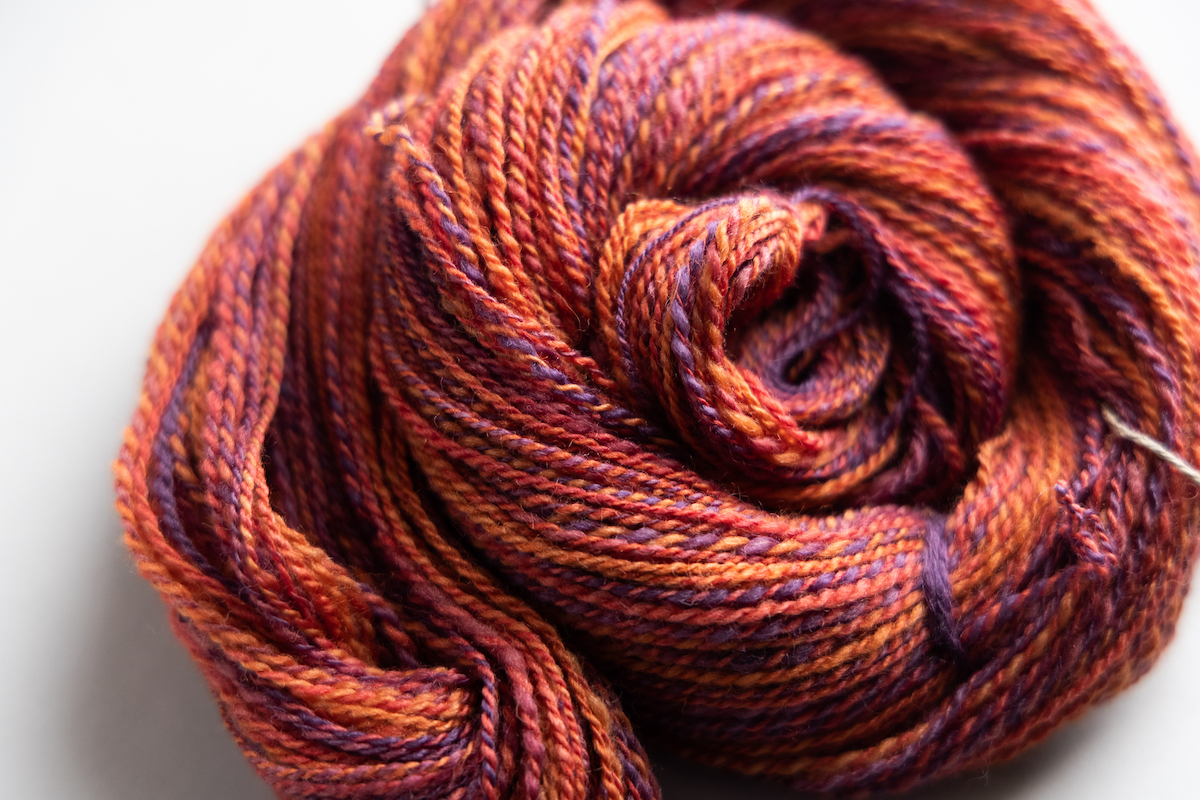 Why I Love BFL (Wool)

sharing my love for this woolly wool on today’s vlog

END_OF_DOCUMENT_TOKEN_TO_BE_REPLACED 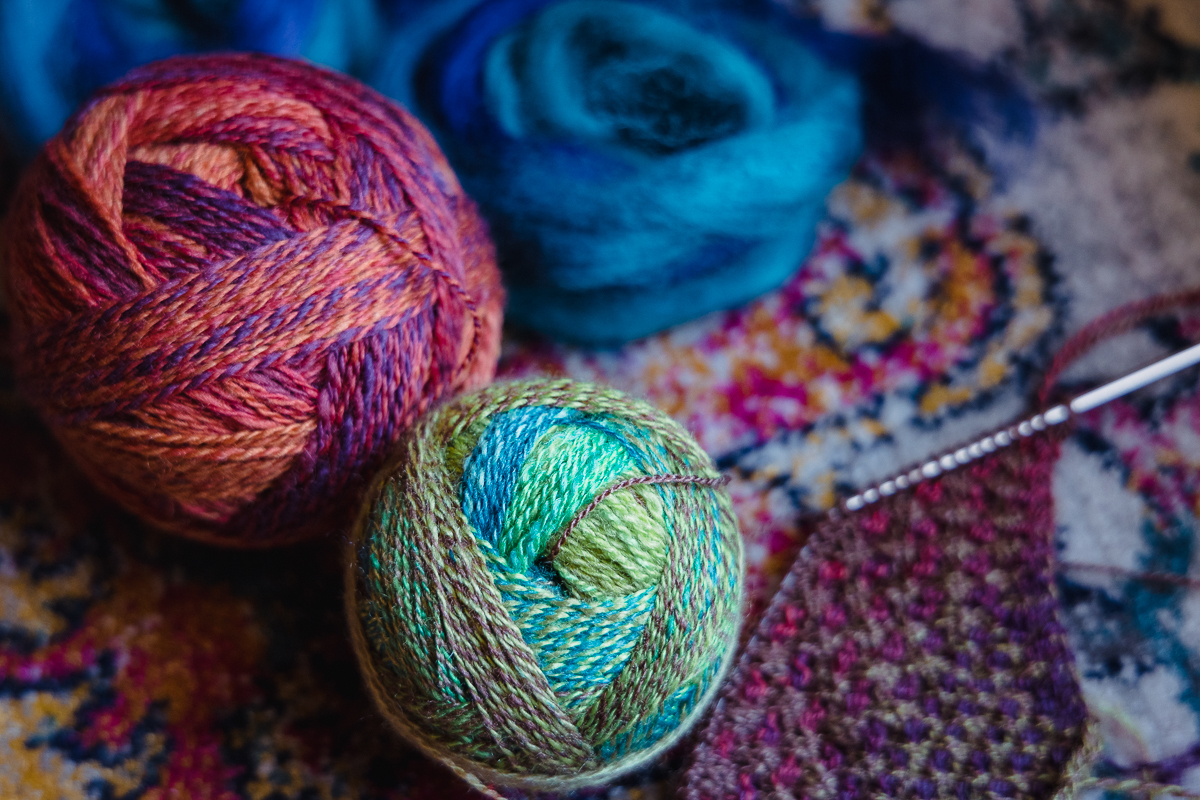 Spinning and Knitting The Shift Cowl

END_OF_DOCUMENT_TOKEN_TO_BE_REPLACED 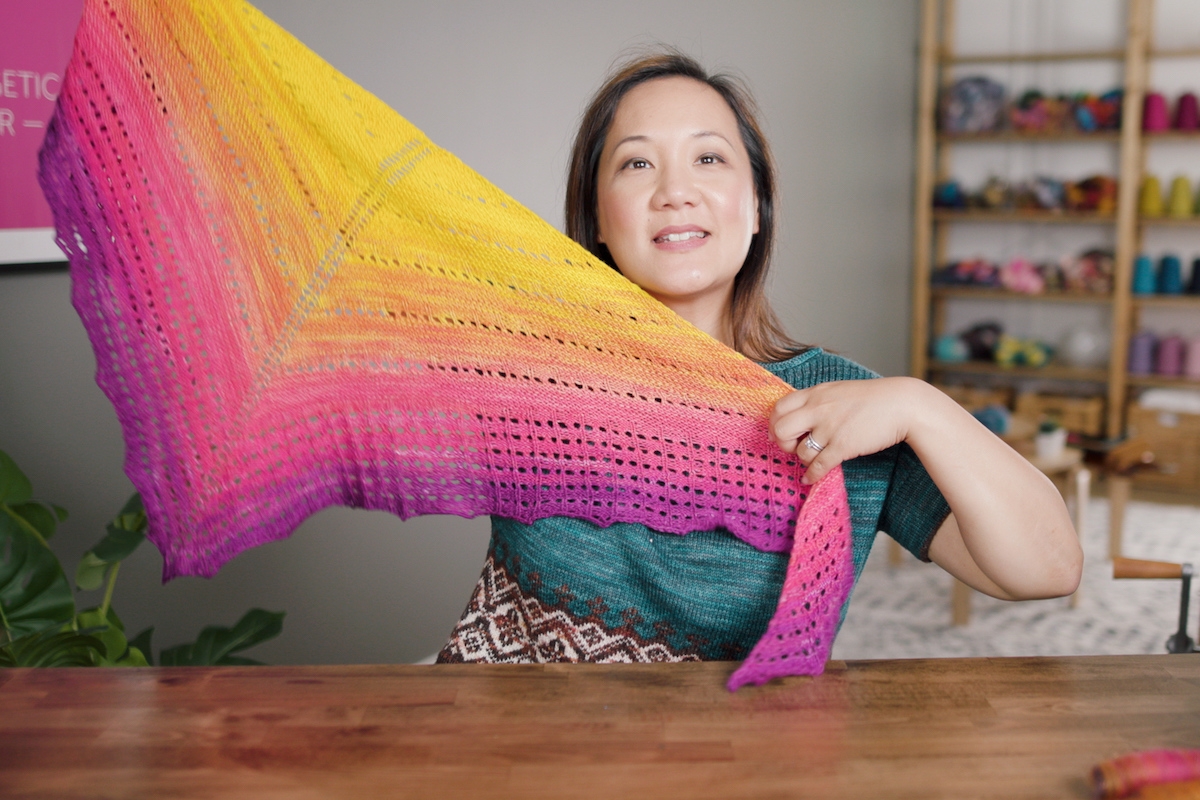 Advent 2021… among other things

Colour and yarn and fibre, all in one vlog

END_OF_DOCUMENT_TOKEN_TO_BE_REPLACED 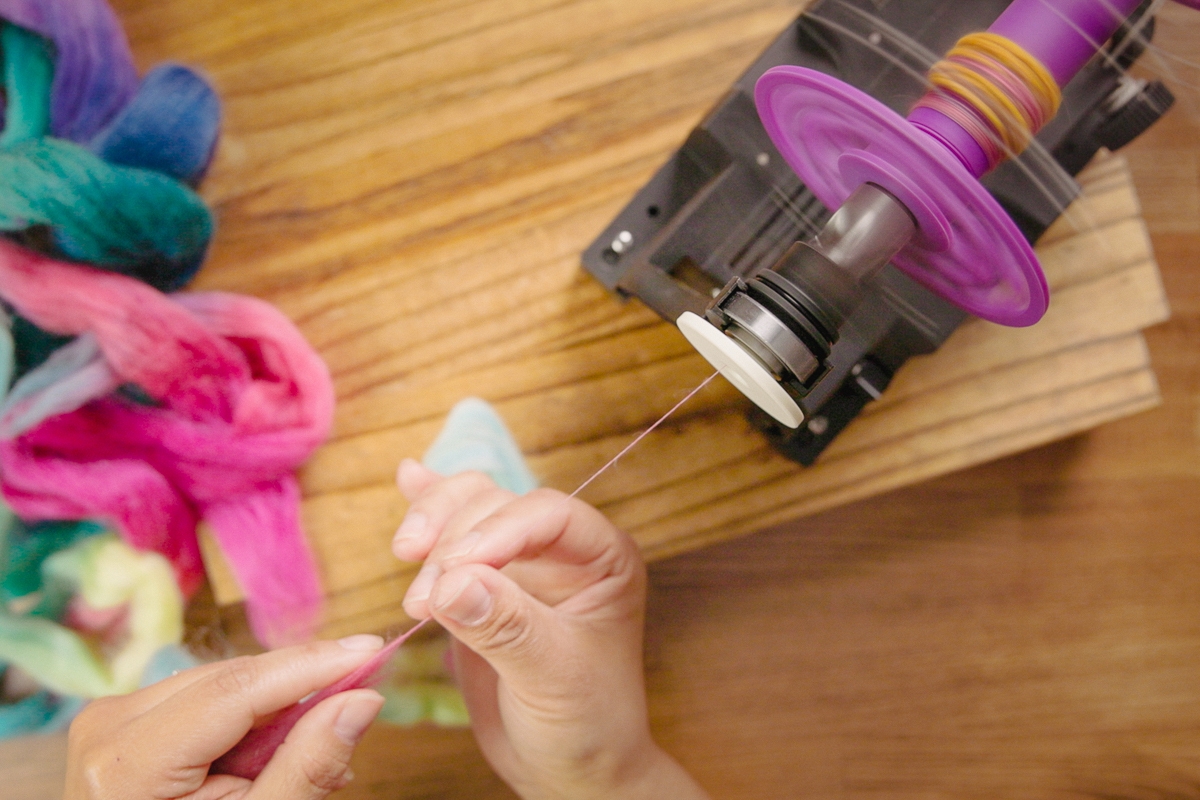 A Closer Look at the EEW 6

END_OF_DOCUMENT_TOKEN_TO_BE_REPLACED 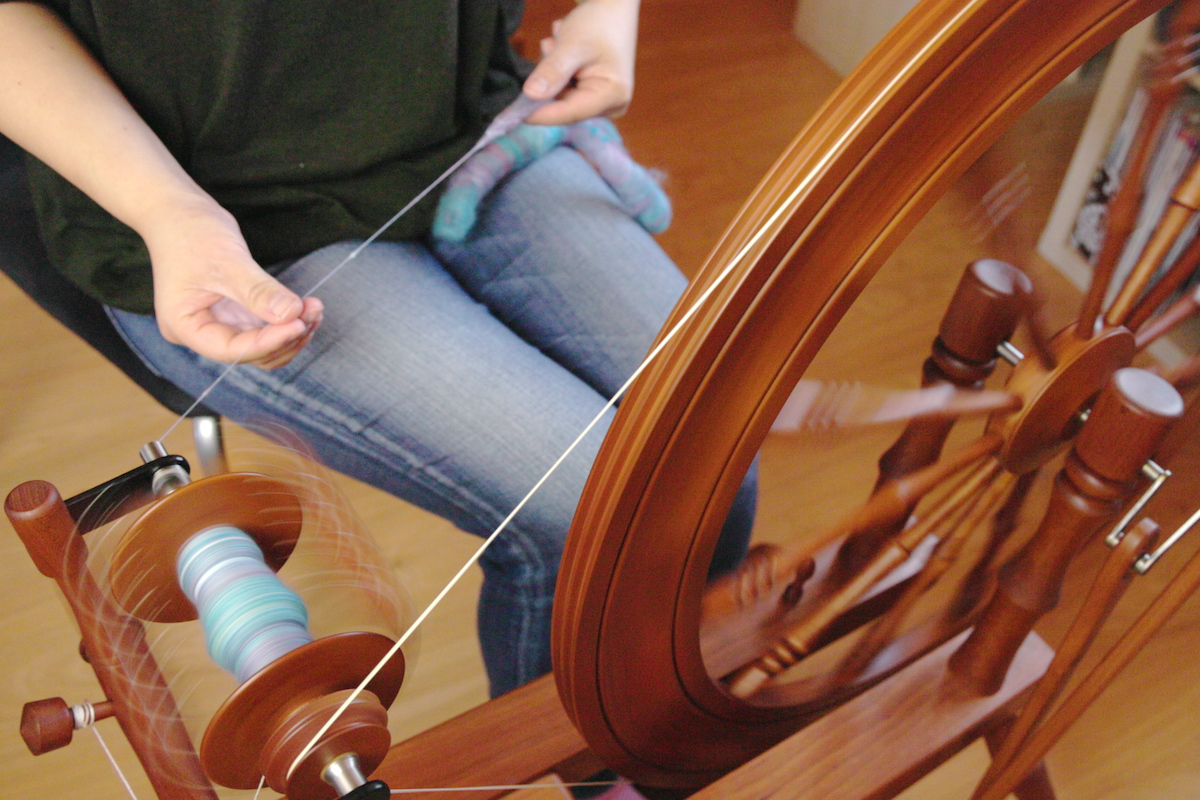 Spinning up these colourful rolags

END_OF_DOCUMENT_TOKEN_TO_BE_REPLACED 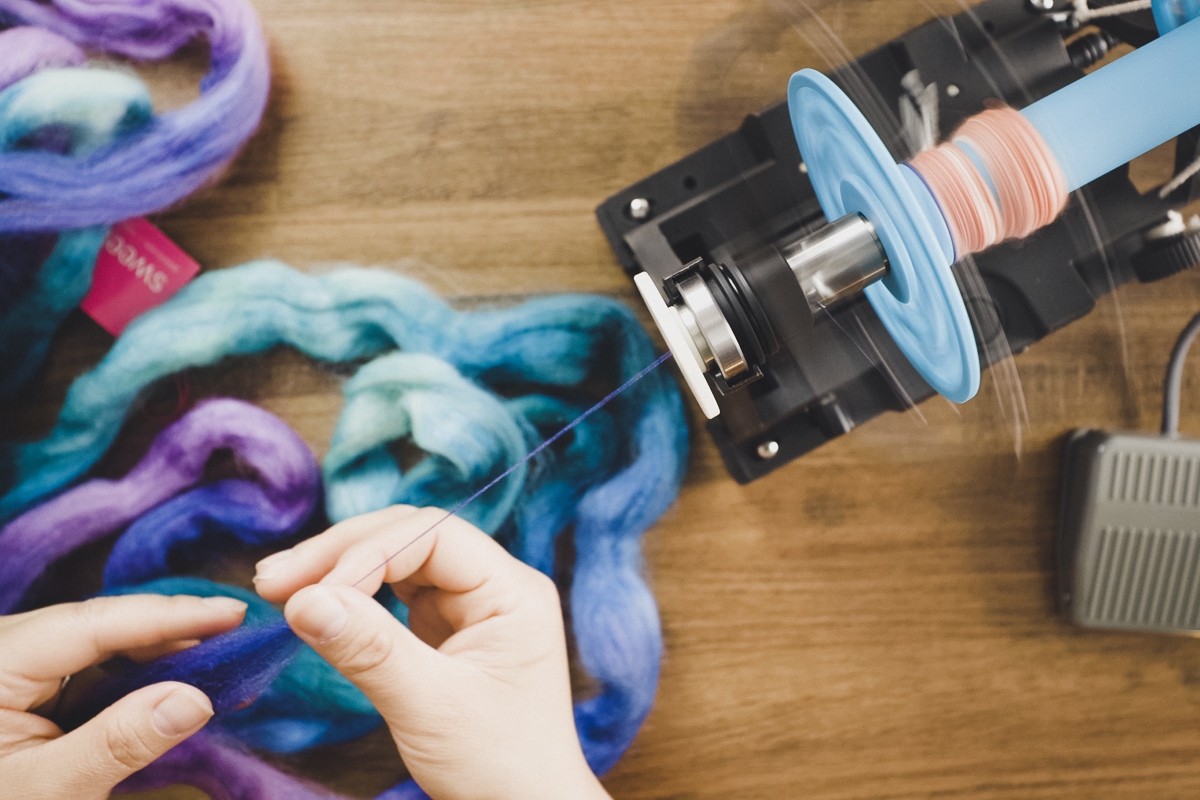 Check out the new EEW 6 with me

END_OF_DOCUMENT_TOKEN_TO_BE_REPLACED 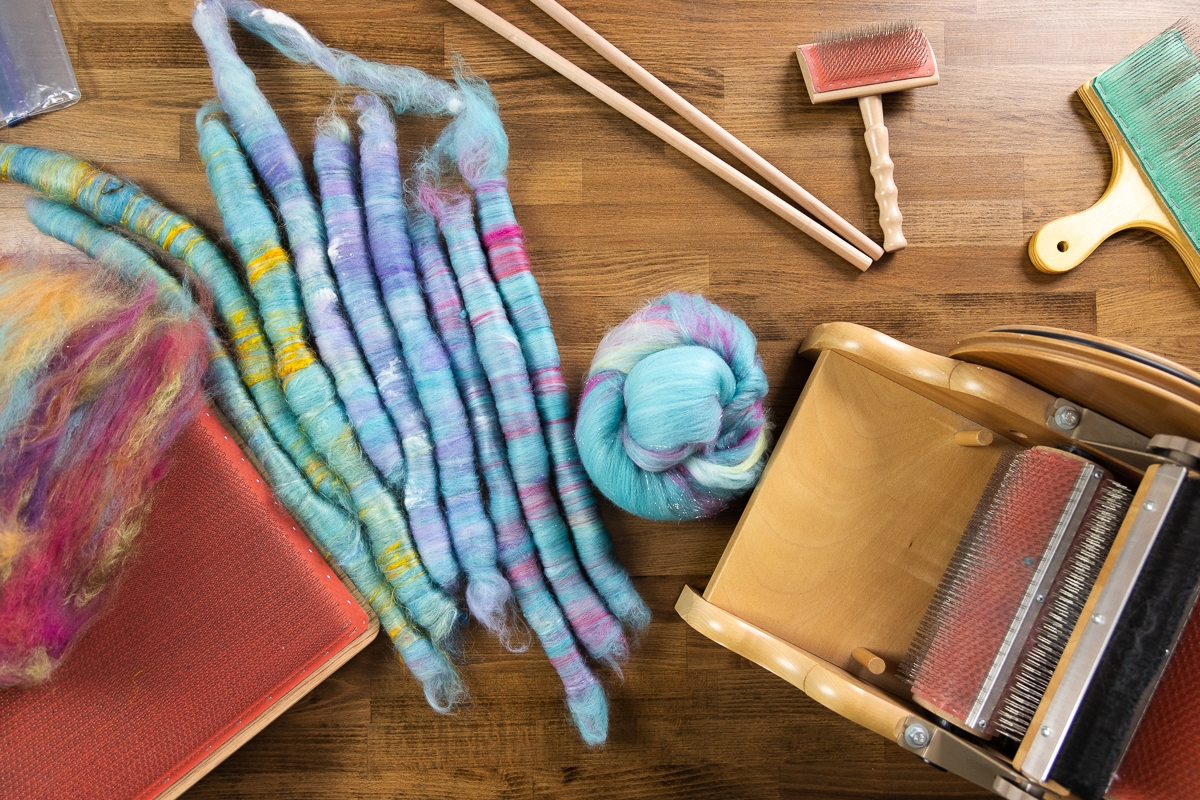 Blending Board versus Drum Carder

How to choose between a blending board vs drum carder?

END_OF_DOCUMENT_TOKEN_TO_BE_REPLACED 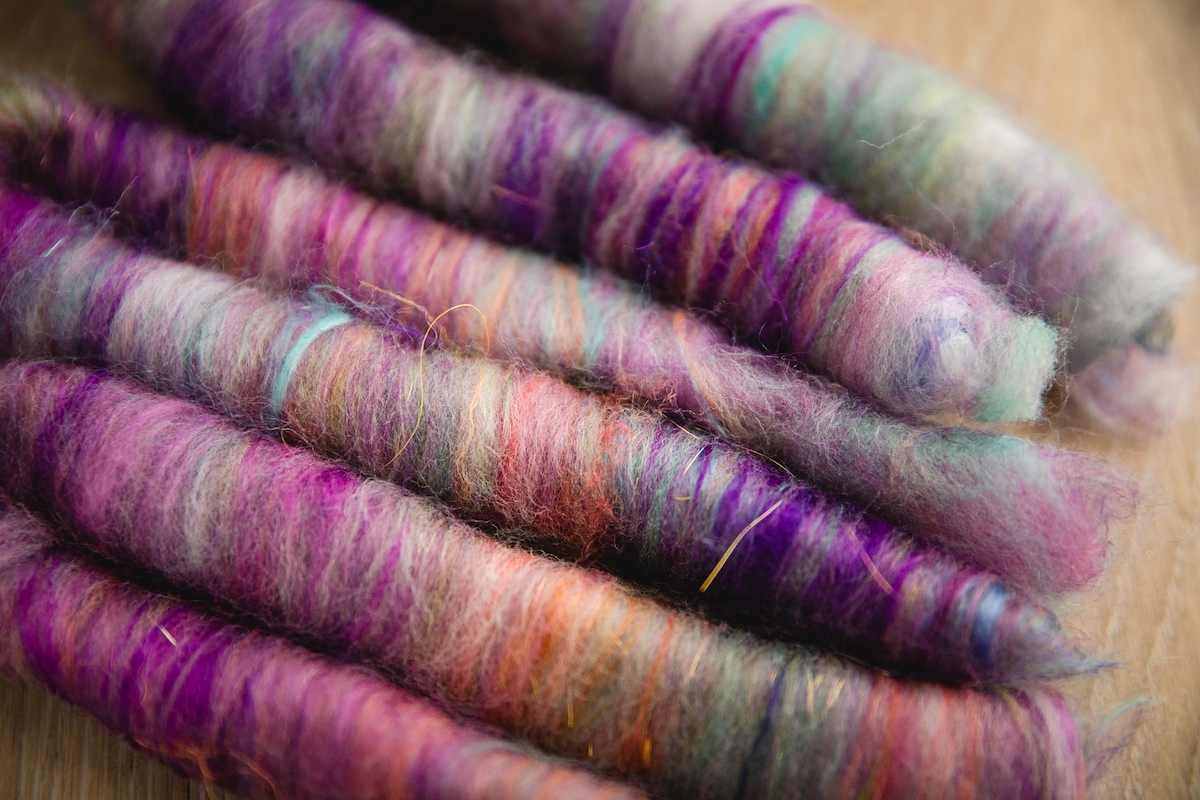